My last post focused on a single question posed by Marcia Lynx Qualey, initiator of #WorldKidLit Month (September). In fact, during our conversation, she asked more questions, and these went into a second blogpost on 30 September, a timely coincidence as 30 September is International Translation Day! Again, many thanks to Marcia for allowing me to cross-post the second piece here.

Marcia’s questions are in italics.

Minjie Chen: It wasn’t until the late 1890s that Chinese intellectuals and reformers, anxious about China’s weakened national power, produced the first magazine that was tailored to Chinese children’s language and interest levels in order to achieve better learning outcomes. A patriotic concern permeated early Chinese children’s reading materials. During the turbulent twentieth century, children’s books were variously hijacked by war mobilization, hero worship, and revolutionary fervor. Beginning in the 1980s, children’s books became less politicized and more aligned with commodities of a free market. Despite my sweeping generalizations, there were always gems, works that entertained and enlightened young readers even while managing not to openly break free of the ideological straightjacket of the time.

China relies on high-stakes standardized testing to allocate limited educational resources among its huge population. Test pressure is often blamed for depriving youth of time for leisure reading. Consequently, the market of books intended for young people is actually dominated by curriculum and test preparations materials. Children’s literature has grown rapidly since 2005, however, and the format that has made the biggest progress is picture books. Numerous publishers have been lured into the business of children’s books so that the current time is characterized as the “Warring States Period” of publishing for youth.

How are the Anglophone genres & definitions of “children’s literature” limiting when looking at Chinese literatures that have been of interest to children?

MC: The question stems from two different ways of defining children’s literature. By a narrow and strict definition, it refers to literary works that are deemed by publishers and gatekeepers as relevant to and appropriate for childhood, based on evolving rubrics that are socially contested and constructed. By a broad and loose one, it can include what leisure reading materials children consume on a voluntary basis. I will not necessarily call the Anglophone definition of “children’s literature” limiting, but will comment that, when children are enjoying what they are not supposed to be reading, it tends to induce (unfounded) worry in adults. One big reason why Chinese youth often read beyond “children’s literature” is that books specifically intended for their ages do not quite meet their need for quality and quantity–although there will always be a minority of precocious readers who prefer Les Misérables to Little House on the Prairie at age ten. During much of the twentieth century, cheaply available comic books (called “linked pictures” in Chinese, lianhuanhua 连环画) published for a general market were the format devoured by Chinese children. It is debatable if all of those books can be redefined as “children’s literature,” but they are undeniably an important part of the history of children’s reading in China. 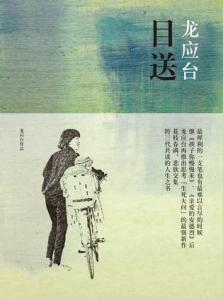 An eleven-year-old girl I met in China this past summer told me that her favorite book at the moment was Watching You Go目送, an essay collection (for general readers) by the Taiwanese writer Lung Ying-tai 龍應台. She opened the book to poignant chapters about the author’s aging parents and told me how those texts resonated with her, because she had witnessed her own grandmother’s early-onset Alzheimer’s disease. Like many Chinese children with working parents, the girl had grandparents as her nannies, babysitters, and escorts for as long as she could remember. Did her response make Lung’s writing “children’s literature”? Perhaps not, but I was reminded how easy it is to underestimate the emotional capacity of a young and tender heart.

One topic that is more directly related to your question is works of nonfiction, and I am not referring to informational books and biography only. My favorite type of “nonfiction” from my childhood reading in China was books of games, puzzles, and math problems cloaked in suspenseful stories. I was intrigued by the Möbius strip (from a bestselling Ten Thousand Whys series); was inspired to make a baguenaudier puzzle out of keyrings and old toy blocks (from a children’s book that introduced me to topology); and was lost in logic problems on an overnight train ride. Those books make math and science hands-on, playable, and exciting. Thanks to them, I never for a second found science subjects boring at school, and have wondered if the success of such Chinese offerings could be replicated to boost interest in learning elsewhere.

Is there a Chinese best-seller list for children’s literature? Do we know what Chinese children are reading?

MC: I am unable to name any that has the equivalent influence of the New York Times children’s bestseller lists, which are widely cited in China to advertise and promote books. Helen Wang has studied bestselling lists released by a Chinese consulting firm and graciously translated the book titles into English. Out of the 30 titles listed as the 2015 bestselling children’s books in China, at least 21 are series installments. Five are the Chinese edition of works by Tetsuko Kuroyanagi, E.B. White, Astrid Lindgren, Sam McBratney, and Roald Dahl.

Do we know what Chinese children are reading? That is a question that deserves serious research attention. To briefly unpack the question, what counts as “reading” nowadays? Children in China, just like those in elsewhere, are exposed to text and images printed on paper as well as projected on screens of every dimension. New communication technology enables the kind of cultural consumption that is multimedia, communal, and participatory. The top 30 titles of bestselling children’s books offer a good starting point to the question, but I think the real answer will be complicated and fascinating.

What are the aims of your new blog, “Chinese Books for Young Readers“? Who are you targeting? What would you like us blog-followers to know about Chinese children’s literature in translation?

Chinese Books for Young Readers is the brilliant brainchild of Helen Wang, who can provide a more eloquent answer to your questions. I had the great honor of being invited to contribute to the project. Speaking for myself, I think the blog can help raise awareness of notable Chinese children’s authors and high-quality works, make it easier for youth services librarians and K-12 teachers who do not know the Chinese language to select children’s titles translated from China, and highlight works that should be of interest to a wider readership than Chinese children. There is a need for children’s book review resources like The Horn Book Magazine and School Library Journal but with a focus on titles from abroad. The realization dawned on me when both Helen and I were guest lecturers of a course on international children’s literature offered by writer Marc Aronson at Rutgers University in spring 2016. His students, a vibrant learning community of would-be librarians and professionals interested in children’s books and reading, raised meaningful questions about how to bring good foreign titles to public libraries, school libraries, and classrooms. I will give my belated reply to them, “Come check out Chinese Books for Young Readers!”

The one thing to know about Chinese children’s literature is that it is making rapid progress in the twenty-first century, and currently the most exciting growth area is picture books. Through translated titles from the West and Japan, Chinese writers and artists have learned how this format works and are crafting their own original stories to amuse and amaze babies, toddlers, and beginning readers. The world will have more opportunities to witness their talent and hear louder, distinct literary voices from China.

5 thoughts on “7. A Brief History of Chinese Literature for Children, What Sells Now, and More”