Bing Xin 冰心 (1900-1999) is a major figure in Chinese literature, and the Bing Xin Children’s Literature Award 冰心儿童文学新作奖 is one of the four major Chinese literature awards. This month, one of Bing Xin’s most famous works, The Little Orange Lantern 《小橘灯》，was featured on Brigitte Duzan’s website Chineseshortstories (including the memoir -essay in Chinese, her translation into French, and the background to the story). Inspired by Brigitte’s post, I have created a similar version for English readers here. 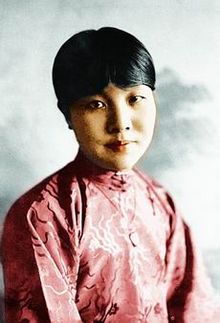 The Little Orange Lantern is one of Bing Xin’s best known pieces, and the title refers to a real lantern made by a little girl for Bing Xin. The author had taken a gift of oranges to her house on the mountain. The following excerpt is from Gong Shifen’s English translation, “The Little Orange Lamp”, published in Renditions, Autumn 1989, pp. 130-132 (pdf here):

I suddenly remembered the oranges I had brought with me. I took them out and placed them on the bedside table. The girl said nothing, just quietly reached her hand out for the biggest one. She cut the peel off the top with a knife, and deftly peeled the rest of the orange with her fingers.

“Who else lives here with you?”  I asked her in a low voice.

“No one else right now. My dad went somewhere …,” she did not finish. She slowly took out the orange segments and laid them beside her mother’s pillow.

The tiny fire in the stove gradually died down, and it was getting dark outside. I stood up to go. The little girl held me back, quickly and deftly took out a big needle with a linen thread and worked at the bowl shaped orange peel. She linked the opposite corners in such a way as to make a small basket, which she hung on a thin bamboo stick. She then took the stub of a candle from the windowsill, placed it in the orange peel basket, and lit it. When she had done all this, she handed the lamp to me, saying,

“It’s dark now, and the road is slippery. Let this little orange lamp light the way for you up the mountain.”

This memoir was first published in China Children’s Paper 《中国少年报》 on 9 January 1957, and was the title piece of a collection of Bing Xin’s writing published in 1960. But, the actual event took place twelve years earlier, on the eve of Chinese New Year (Spring Festival), 1945.

The background to the memoir-essay came to light when Li Bo 李波, editor at Pupulan Picture Books 蒲蒲兰绘本馆 decided to create an illustrated edition of The Little Orange Lantern. She had fond memories of reading The Little Orange Lantern in her school text book, and of each child in the class taking an orange, a candle-stub, a stick, a knife and needle and thread to school to create their own orange lamps. (Perhaps the nostalgia is similar to creating one’s first Christingle candle, or one’s first Halloween lantern?) Like most children, the editor remembered the little orange lantern rather than the political context.

Zhang Dongyu 张冬彧, creator of The Faraway Kite 《遥遥的风筝》 (2010),  was invited to create the illustrations. The team read the essay carefully, pooled their thoughts, and created the first illustrations. But they wanted more background information. Eventually, they met Bing Xin’s daughter Wu Qing 吴青 and her husband Chen Shu 陈恕, who agreed to travel with them to Chongqing with the aim of collecting historical visual materials to ensure that the illustrations of The Little Orange Lantern would be accurate. Li Bo, the editor, wrote a blog post, with many photographs, about the creation of this picture book, including their visit to Sichuan. Take a look!

So at the end of that April, the editor, illustrator, Wu Qing and Chen Shu went to Chongqing, where they visited the sites mentioned in the story. They went to Geleshan 歌乐山 to the site of the village office building. The building no longer existed, but many old houses on the street were still standing, and they were able to go inside and see a flight of dark, narrow stairs, table and bamboo stools, of the kind described by Bing Xin. Then, walking in great heat on the mountain, they traced Bing Xin’s steps to the house with the yellow fruit. They found the site, but the house with the yellow fruit was no longer there. The following day, walking through the streets of Chongqing, they found a few old trees with yellow fruit among the new buildings of the city. They also visited the Chongqing Museum, where the photographs and documents on display provided further evidence of the past: of the streets, the clothes, the telephones, tables, chairs, as well as little everyday details, which were so precious for recreating the context of this new illustrated version of a favourite story.

8 thoughts on “23. Bing Xin and The Little Orange Lantern”